For the desperate and the depressed, impatiently waiting for Spring.

The winters get long here. They’re lovely, serene and the depths of silence and snow hug you close through the cold stages and allow you to center yourself. The food is hot and nourishes the depths of your ever expanding winter belly. In some ways, we hibernate; like the bears we get silent and still and warm and fat. We find ways to survive the seemingly endless winter months, entertaining ourselves with the temporary pleasures of snow games and exploration. Then comes a point where the patience begins to wane and we start planning for spring, pretending we’re closer than we really are: Garden plotting, seed starting, hatching eggs, maintenance and renovation plans, fishing trips, camping goals and the dream of diving off logs into the cool crisp lakes. Wanting to stretch in the springtime sun as we emerge from our cocoon, refreshed and ready to take on the real new year.

This moment however, is the hardest part of winter. When the warmth and brightness of spring begins to tease you and torment the soul you didn’t know was desperate. It’s a time to feel lost and lonely within yourself. Your ideas and effort are spent, the novelty of snow men, snowmobiles, snowshoeing and winter games have worn off, the holiday glow is long forgotten, and you’re desperate for change.

This is when I start to feel unsatisfied with who I am and what I’m doing. The big questions start rolling in: Why? Who am I? Other than a mother and a motivator for this stunning life we live, who am I? On the rare occasion that I walk alone, how is it I can’t talk to myself anymore? I’ve lost my inner voice, my constant. What do I need to do in order to find her again?

I sit with a coffee staring at the beauty and grandeur of where I live, truly grateful for the luxury and a little guilty that at that moment I want more. Even though the days are getting longer and warmer something makes them drag on, for it’s still not enough. I long for the grass on my toes and the dirt between my fingers. I long for the blue glow from the TV to disappear. I long to sit on the deck with my love and drink whiskey while we stare at the sky, contemplating whether the city lights or the stars are further away.

So here’s a toast, to you and to me. A toast to the last stretch of winter and the sneaky arrival of spring. A toast for all of our desperate souls that seem to run out of patience and sink into despair at the same time every year. We’re almost there and it will be just as glorious as every single spring before.

Empowering Children to conquer more and believe in themselves.

It has been cold here the last little while, hovering around -20 for over a week.  It’s hard to get out and get motivated in the winter sometimes, but I strongly believe that it’s more important in the winter.  It’s easy to sit inside and cuddle up with a book or binge watch Netflix and our modern day luxuries don’t force us outside like they did decades ago.  As a result, children and adults alike have far less winter skills that we used to – so we’ve decided to change that as a family.

We find way to engage the kids outdoors and teach them skills without them realising it isn’t just a game.  My husband and I wanted to get them out for some fresh air and exercise, and the kids were in the mood to act like zombies, so like the good little mountain parents we occasionally are – we invented a game.  We played this amazing game a couple of weeks ago and it’s sure to be repeated many times even during the summer months. A game of  survival, critical thinking and adventure!

We drove up our mountain as far as we could get in 4 feet of snow, then proceeded to unloaded the kids and the snowshoes.  Once everyone was strapped in we went for a bit of a hike asking the kids to pay CLOSE attention to their surroundings as we walked.

Once we’d gone a ways (with a clear snowshoe path leading back to the truck), we asked them to lead the way to the truck but they couldn’t take us on the same route.  They needed to think about it and find an alternate route that would take us to the same spot – cut their own trail, if you will. They looked slightly forlorn, as the forest canopy rose 60 feet above them and a deep quilt of snow covered the ground.

We talked about the surroundings, the details, the things they may not have noticed on their own.  We asked them to study the trail we had left in the snow and think about where the truck was.  Could they point in the direction it was parked?  We asked them to look at the sun and compare it to the position of their body while they faced the direction they intended to walk.  When facing the truck it was slightly passed their right shoulder.  We were less than 20 minutes from the truck so the sun would move very little before we returned.

We didn’t give them the compass, so the boys (aged 5 and 7) had to get us back on sheer brain power.  They looked around for a minute, talked about it between themselves, made a plan and off they went with dad and I in tow.

They chose a pretty route that followed an active set of coyote tracks over a hillside and into the forest.  The ground was alive with animal activity.  They looked at the tracks and the different sizes, trying to guess how many were in the family.  It hadn’t snowed in several days, so it was possible that this was days worth of activity from the same family members, therefore increasing track numbers.  My husband tracks for a living so he was teaching them different ways to analyse them and to tell how fresh or old they were.

At one point our path started to shift a little north and we had to remind the boys to notice the sun and turn their bodies back to the body/sun position they had started with.  We climbed over boulders and logs, we dipped down below fallen trees and we trudged though snow as deep as the boys.  Just as they were getting a little frustrated and feeling the shadow of defeat creep up our truck appeared over the bank. Huge smiles of pride and success washed over their tiny faces.

It was a day of triumph. 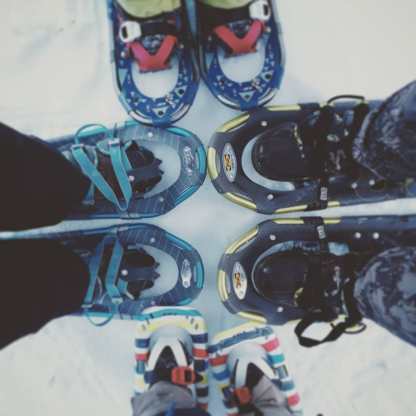 You ask me why I dwell in the green mountain;
I smile and make no reply for my heart is free of care.
As the peach-blossom flows down stream and is gone into the unknown,
I have a world apart that is not among men.

Social distancing like pros! Me and my main men, getting outside and getting busy. Some days are hard, most days have stretches of boredom, but we're a strong family and luckily we all still love spending time together :) 🌲Get outside!👊 #socialdistancing #flattenthecurve #stayhealthy #stayactive #staysafe #familytime #stayhome #staythefuckathome
🖤 Still my heart, sweet darling boy. #amotherslove #lovemyboy #snuggles #heart
This little doll climbs the stairs onto the deck and tracks us down through the windows. *melt* It will be so cute when she's 1500lbs 🖤 #calf #homebody #springbabies #annabeth #annabeththecow #babycows
Babies!!!!
'Cause staying home is hard on all of us. Oil questions? LOL Message me. . . #cardamom #familytime #toomuchfamily #newtohomeschooling #ivehadenough #canthandleit
Sometimes the front porch, dog bed is covered in dogs - sometimes not. . . . #frontporch #dogbed #notdogs #pigsofinstagram #piglets
Follow The Spell of the Mountains on WordPress.com